Chavez Pumping was created in 2017 by Mark Chavez due to the lack of reliability by other service providers. Chavez Pumping was originally intended as a single 39m concrete pump to be kept in-house and to solely service Chavez Concrete Contractors. It was quickly evident others locally were facing concrete pump servicing issues. This irritation birthed its values and a new rental division. The company chooses to run its pumping like its concrete company; “You are the customer; you tell us when and where”. The thinking that the pump can dictate the concrete companies schedule is something that is never sat well with Chavez's Concrete Contractors. This frustration has taught Chavez Pumping how not to run their business and promises to put the contractor first. Two months after receiving their new Schwing 39m, Mark Chavez received a phone call. A lighthearted casual conversation regarding “a couple of hundred yards of concrete pumping” turned into its first-ever received and signed contract. Facebook was now Chavez's Pumping pump partner. The demanding schedule and the sheer volume of concrete thrust the company into purchasing another concrete pump, this time a new 46m. Chavez can now look back with pride and say that it bet on itself. That initial conversation may have had one or two falsehoods about the number of concrete pumps it owned. What equipment it may have lacked at the time, it was quickly made up by its ability to source equipment, determination, and an old fashion “my word, is my word” value. Thanks to Schwing America's commitment, their 46m arrived ahead of schedule and ready on day one. Soon after, a competitor remarks on how its 46m lacked the reach for the future, this again led to another 2 pieces of equipment, a 52m and a “specialty 31m boom” that features the industry’s only telescopic boom. In October 2018, the two-year-old company was inspired to find solutions to the lack of labor force that everyone was facing. The lack of labor was the inspiration for Chavez Pumping’s next purchase. A Telebelt TB130 was a simple fix to combat the growing labor shortage. The machines’ ability to move various materials offered solutions with speed and a fraction of the labor previously needed. Everything from 4-6” stones, sand, mulch, and concrete was now obtainable, and cost-efficient. The Telebelt was another giant leap of faith in a market like New Mexico that had never seen a Telebelt before. In the beginning, it became a very daunting task for Mark Chavez. Creative promotions, one-time demos, promotions, and word of mouth still left early doubt and many nights questioning the purchase. As he force-fed it to Chavez Concrete, they soon got more creative with its uses. Those were shared within the Albuquerque concrete contractor community. It soon after became a one-stop shop for contractors. Placing concrete in the morning and base course in the afternoon without the need for another setup, cleanup, or move. In its evolution, it was evident it needed a smaller boom and a larger boom. It acquired a 17m in addition to a 58m. The 58m is the largest operated boom in the state. Chavez Pumping can now service any project at any level with the most diverse fleet in the state of New Mexico. The booms range from a 17m, 31m, 38m, 39m, 46m, 52m, and a 58m allows the customer a wide range of flexibility and the delivery of the right equipment for the job. Chavez Pumping has quickly established an excellent reputation with even the toughest of rules and regulations. Within a short time, CCP boasts contracts with New Mexico’s two largest projects including operations in Texas, Louisiana, Oregon, Arizona, and Washington. New Mexico’s widely publicized Facebook project was what put CCP on the map. The first phase is now completed after 4 years and CCP is excited to announce being contracted for the 2nd phase which is rumored to run up to 10 years. Project Chico, Amazon’s 1st distribution center in New Mexico is another exciting project. The single largest building in the state of New Mexico at 2.6 Million SQFT. On two different occasions, CCP stepped up and met a challenge that it’s never seen or heard of before. Two concrete pumps pumping 24hrs a day constantly without stopping from day one till the end. The first of these two placements lasted 6 days and the second being 8 days in duration, pumping roughly 18,000 yards pumping of a harsh mix with 7.5lbs of fiber per yard. Each individual placement was a minimum of 500’ of 5” hard-line system. The longest in length was a single run of 1110’ of hard-line system, 970 yards, on this particular placement. The “Project Chico” project propelled the company into “Project Nico” that’s another significant project for the team. A secret “Spin Launch” project that is the first of its kind in the world and will be highly publicized once completed. In addition to these large projects the company also maintains great relationships with the largest GC’s in the state of New Mexico and other concrete companies also servicing the National Laboratories, Federal and state work, residential slabs, and the local DYI home contractor who is provided the same service and quality. Each piece of equipment undergoes a self-imposed stringent annual inspection. This is only done by a factory-approved, certified boom inspector who is one of 3 in America certified through Schwing America. Each of the company’s operators must obtain their ACPA (American Concrete Pumping Association) certification after being hired. This is the industry’s only recognized pump-specific safety certification for concrete pump operators. As the future of Chavez Pumping continues it will be its rigorous and continued “Safety First” and “contractor first” approach that will propel it into the future.

"I truly appreciate all of your hard work. All of your operators are professional and hard working. The willingness to work with our crews has made this tough project move much smoother than we expected. Willie Baca Jaynes Structures, Inc. Concrete Superintendent"

What do you offer that other companies don’t?

We offer the most experienced team in the state.

How does pricing work?

Send us details and we can bid your job appropriately.

What can I expect when you arrive for the appointment?

You can expect your equipment to arrive in good working order, on time, good attitude, and a professional whos ACPA certified for your team and jobsite safety.

What sized equipment do you offer?

Do you have equipment to move gravel, base, mulch, sand, and more?

Yes! Our Telebelt is the only New Mexico owned Telebelt in the state of New Mexico. It can move any material within reason and we supply a hopper to load whatever your project demands.

What type of volume can I expect out of a Telebelt vs a Concrete Pump?

Depending on service, you can expect up to 60% - 70% more in production with the right application and team. 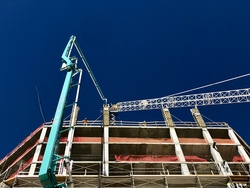 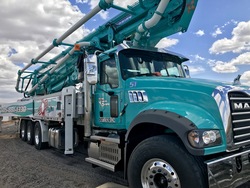 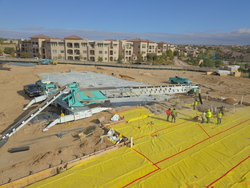 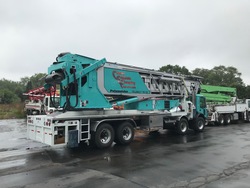 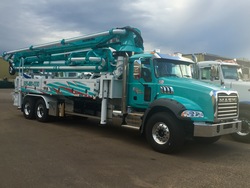 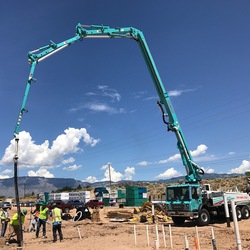 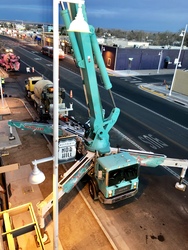 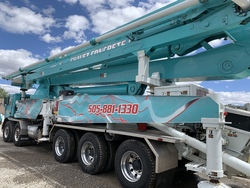 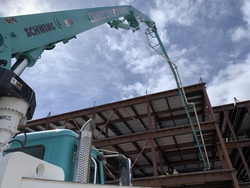 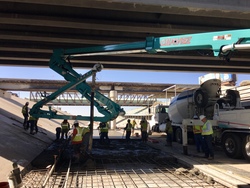 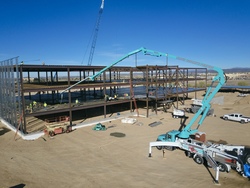 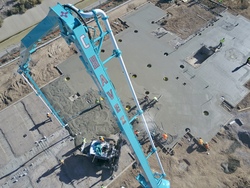 Schedule a Concrete Pump or Telebelt